With Android Oreo, Google Introduced the Project Treble which focuses on Faster Android Updates by separating the Silicon/Hardware Code from Android Framework.

Now, Redmi Note 4 was launched before the launch of Android Oreo, but thanks to the abhishek987 who used Cust Partition as a Vendor Partition which enables Treble Support on Redmi Note 4. Not on just Redmi Note 4, but on all other devices which do not support Project Treble out of the box. 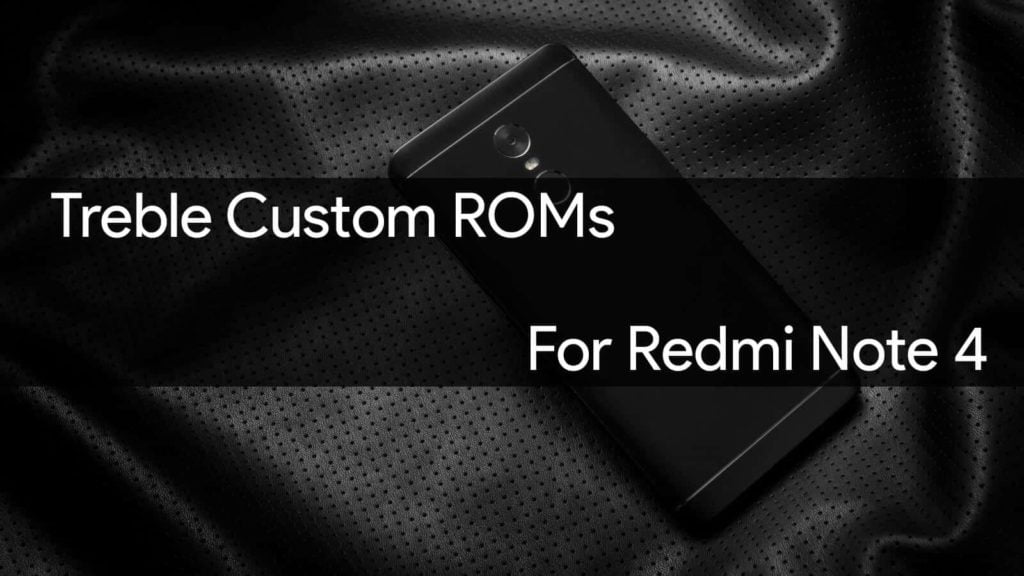 Many Android Oreo-based Custom ROMs support Project Treble so let’s have a look at all these ROMs and their Features.

Get Android P features on any Android Device

Note
Note: For Installation Guide about TWRP and Android P GSI and other questions about Project Treble, Please Check the FAQs Section

LineageOS is a Well Known Custom ROM and is used by a large number of Android users. This ROM is known for its consistent performance and update frequency.

Previously known as CyanogenMod, LineageOS comes with few but some useful features. All of the Sensors are working great with almost no Bugs.

If you ask me for a Daily Driver, this would be my Answer.

Resurrection Remix is a Combination of features taken from many Custom ROMs. If you like Customizations, a lot of it, then RR is the Custom ROM you need.

RR is based on LineageOS, while the features are taken from Omni, Slim and few other features are exclusive to RR. The ROM is stable and all Sensors are working.

AospExtended, as the name suggests, is an AOSP based ROM with some extra features. This ROM is used by many Redmi Note 4 users because of its Stability, Stock Android UI, and features.

All functions are Working great with no Major Bugs.

crDroid is based on LineageOS Custom ROM. Like Resurrection Remix, crDroid is also a Feature-rich ROM. Some of them are:

What is Project Treble?

Before Android Oreo, The Updates for Android Smartphones were dependent on the Smartphone Manufacturer (Ex. Samsung) and Chip maker (Ex. Qualcomm)

So A smartphone manufacturer has to wait for the Code (Vendor Implementation) from Chip maker which can communicate with Android OS. Manufacturers like Samsung and LG have their own Modified Android OS which makes this Process very Time Consuming

Project Treble Solve it by Separating the Vendor implementation from Android OS. So Smartphone manufacturers can update Android OS without waiting for Vendor Implementation.

How to Flash a Treble Enabled Custom ROM in Redmi Note 4?

The Bootloader should be Unlocked and Also Install ADB and Fastboot in your PC. Download the TWRP and Rename it to recovery.img and Place it in your ADB Folder (C:\adb)

Step 1: Boot into Fastboot Mode by Pressing Volume Down + Power Button at the same time.

Step 2: Go to the C:\adb folder and Open Command Window by Holding the Shift Key and then a Right Click.

Step 4: Type this Command in the Command Window

The Recovery is flashed and You can now Install the ROM.

Step 5: Type this to Boot into recovery

or Power down the Device and Press Volume Up and Power Button at the Same time.

Step 7: Go into Install Section and Select the Treble ROM, Swipe to Flash the ROM.

Step 8: Flash the GApps and Modified Magisk (For Treble ROM only)

Yes, You can. Once you flash a Treble Custom ROM, You can flash Android P GSI image. Here’s how