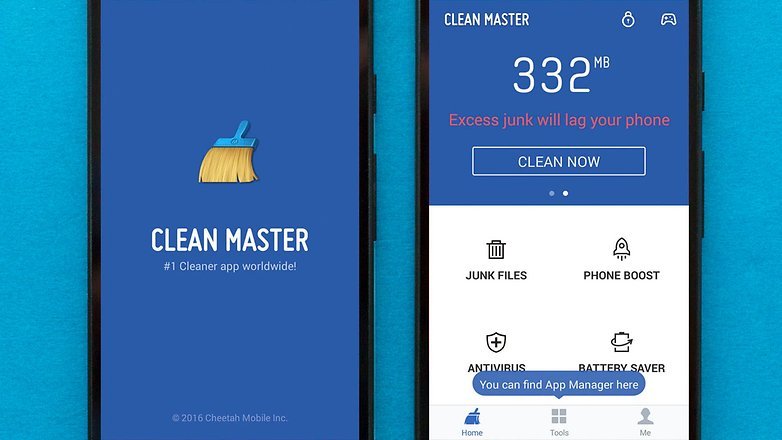 The budget segment of smartphones now have some powerful phones and perform well at their price point, but many smartphones today need some pushing to overcome the further limitation. There are many well-known apps for memory cleaning, task killing and RAM boosting and one them is the Clean master Most of the new Android users are using this or similar app and they are pretty sure about that memory boost feature. But actually, You don’t need the Clean master at all. Most of the Clean master features are already present in Android OS. Read further for the full explanation.

How we tested the apps

We benchmarked the phone on CPU and RAM usage right after restarting it, when the number of processes on memory is the bare minimum, and also after launching four memory hungry games and apps, where the memory is being taxed and apps are being offloaded from memory on opening any new app.
Taking these two benchmarks, we compared them against a benchmark taken right after cleaning the memory using a third party cleaner app.

Here are the results-

So our result shows that there is some improvement in scores, but actually, an inbuilt task killer feature does the same thing. And this feature can be found in all Modern Android devices.
Almost all apps run a background service for a better experience and this background service can’t be killed by the clean master.
When you launch an app that app runs on RAM. and Clean master clear this app from the RAM but the background services of the app still running in the background.
So the simple thing is that many new Android users don’t know much about it. They love their phone so they search for a phone booster or junk cleaner app on play store. The first result is always Clean master and that 1 Billion download mark attracts like a magnet.
The Junk Cleaner is actually a Cache Cleaner and You can clear cache on Settings-> Storage-> Clear Cache.
And let talk about the Antivirus feature. So I am using my Android device for last 2 year and I never installed any Antivirus app. And the result is that I never got any virus on my smartphone.
There are some websites online which sometimes gives a Notification about Virus on your Device and Redirect you to Play store or gives you an apk file to Download.
If you Downloading a file from a website then there some chances that the app is a malware. They just display some advertisement on your Android screen. They can be easily removed by hitting the Uninstall button of the app. You don’t need a separate app for removing an app.
Android’s RAM management and cache management system are good already and you don’t need a separate app to clear cache or clearing RAM.

In Windows when the RAM limit is exceeded, the OS starts using a hard drive.
And Hard-drive is much slower than RAM. RAM is created for fast access and the program which runs on the hard drive will lag a lot.

In Android, if RAM limit is exceeded, instead of using your flash drive OS starting killing apps which running in the background to free some RAM.
However, you must be thinking why Android lags too much sometimes, actually, the processor is responsible for this.

How to stop all heavy apps from running in the background? (for real!)

All Clean master and similar apps claim “Performance boost”. Just Tap on one button and You just boosted your smartphone Performance, well that’s not the case with Modern Android OS. As most of the smartphone has an inbuilt task killing feature which does the same thing as of Clean master and other apps.
And if killing background apps is your main concern then you can use Greenify. This app Hibernate apps and really stops them. I have been using it from last few months and it is doing the work.
You can read more about this topic here:-
Androidpit: Interview of Cheetah mobile to ask if Clean Master actually works
Makeuseof:- Why task killers apps are bad for Android

5 thoughts on “Does clean master really work? Here is the full answer.”